RMC helped a well-established construction contractor in central Virginia redefine itself with a new brand and establish an online presence. Check out the case study below to see how we did it.

Puckett Construction LLC is a class-A general contractor that has been serving Prince Edward County and south side Virginia for many years. They provide custom home building, roofing, and hauling services, among many others. Last year, they decided to begin offering residential and commercial sealcoating services as well, which proved to be quite popular. In fact, there was such a demand for a paving contractor in the area that they decided to further expand their services in the coming season to include asphalt paving.

Daniel Puckett, the owner of Puckett Construction LLC, wanted to promote his new paving services online, but his company didn’t have a website. In fact, his business didn’t even have a logo or an email address–he was using the email address from another business he owned for the construction company. Daniel needed to create a brand for his business and establish an online presence so that he could be found by people searching online for the services he offered. He approached RMC for assistance in this process.

Daniel met several times with Kevin Jordan, the principle consultant at RMC. After discussing Daniel’s goals with him and interviewing some of Daniel’s current customers, Kevin recommended that Daniel form a subdivision of his construction company that focused just on paving and sealcoating services. By creating a brand that was laser-focused around one specific purpose, it would be much easier to create a website that ranked highly in search results related to those services. People would also be more likely to hire a paving company to do paving and sealcoating work vs a construction company that offered many services, which happened to include paving and sealcoating. 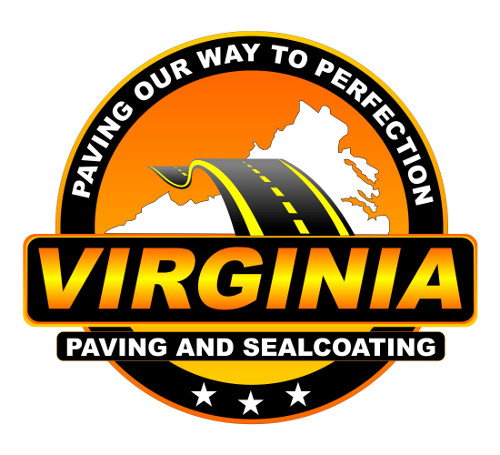 Kevin suggested to Daniel that he call the new division of his company Virginia Paving and Sealcoating, which would give the brand credibility and allow him to expand his services beyond the immediate geographic area.

In their interviews with Kevin, several of Daniel’s customers described him as a perfectionist that wouldn’t rest until the job was done right. With that in mind, Kevin suggested a tagline for the business of “Paving Done to Perfection”. The new logo that RMC designed for the business was an instant hit, and gave the company the appearance of a very professional operation.

Once the brand was created, it needed a core difference in order to stand out from the competition. Kevin knew this was an absolutely vital step, especially for a new business without a long track record–otherwise Daniel would be forced to compete based on price alone.

Since Daniel’s construction business offered snow removal services, Kevin suggested that Daniel bundle those services with his paving and sealcoating services. After all, anyone who has a surface that needs paving will also need snow removal services, so it made perfect sense–and yet, hardly any paving contractors offered snow removal. With Kevin’s help, Daniel created a “PSS Total Surface Protection Package” that allowed commercial clients who used him for paving, sealcoating, and snow removal to get a discount on all three services. No other paving contractor in the state offers anything similar to that.

After defining the core difference for Virginia Paving and Sealcoating, the next step was to create content to communicate the company’s value proposition to its target audience. RMC’s copywriting team got to work and created a marketing kit that included a case study, testimonials, FAQs, a photo gallery, and the story of how Daniel’s construction business got started. A printed version of the marketing kit could be used in sales situations that required it, but the content from the marketing kit would also be used for the website.

The last step in the project was to design a professional website to represent the brand online. The website would need to have a responsive design so that it would display correctly on mobile phones, tablets, laptops, and desktop computers. It would also have to be highly optimized for local search–i.e., searches done on Google for paving and sealcoating services that included a local geographic term. It would need lots of keyword-optimized content as well as multimedia content in the form of videos, and of course strong calls to action throughout the site.

Lucky for Daniel, building websites like that is a something RMC specializes in. Below is the finished product: 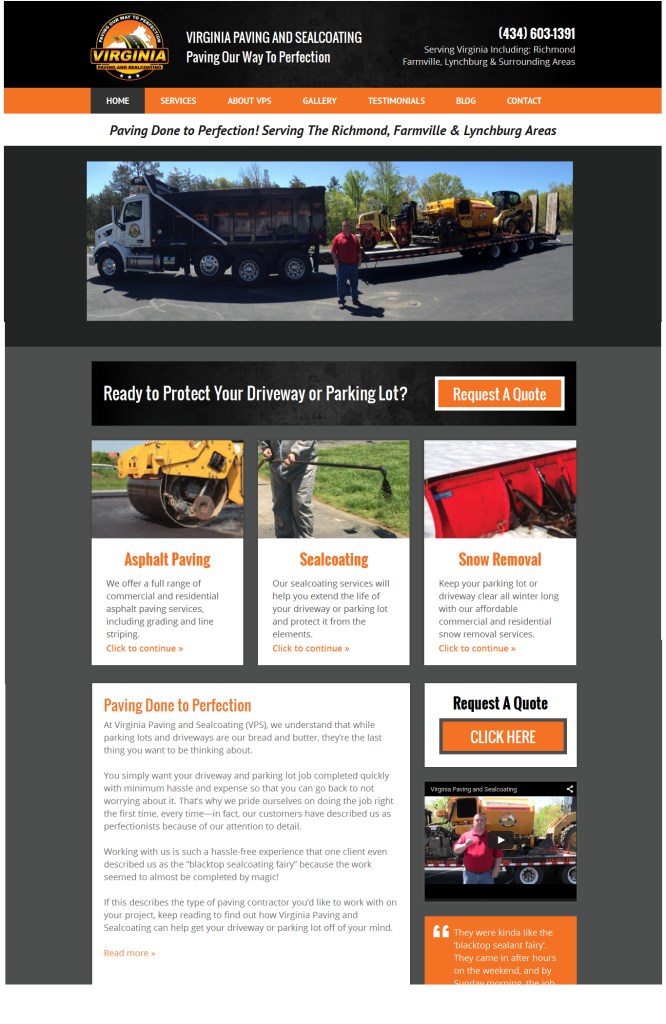 Thanks to the fact that the site was designed with SEO (search engine optimization) best practices in mind, within six months of being launched both the website and listings set up on for the business on various local directories were dominating search results for relevant keywords. The screenshot below is the first page of Google search results for the phrase “sealcoating Farmville VA”, and each link pointing to the VPS website or a VPS business listing is indicated by a red arrow. 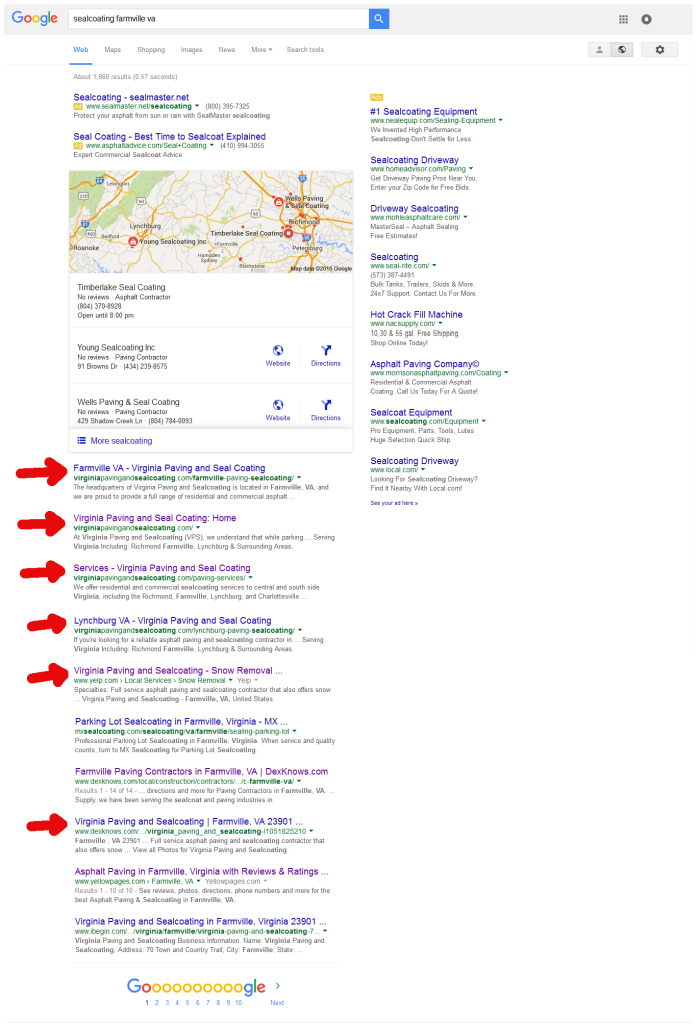 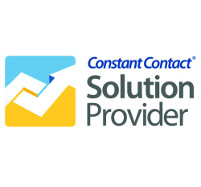