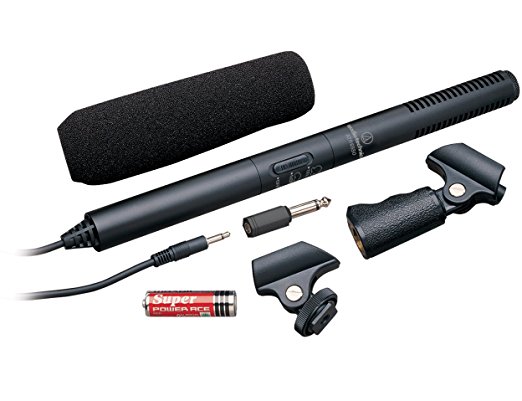 Four Types of Microphones To Use For Your Marketing Videos

As any video expert will tell you, the difference between a high-quality video and a poor or average quality video has a lot less to do with the picture quality and a lot more to do with the audio quality.  With that in mind, today I’m going to suggest four types of microphones to use for your marketing videos to get some really high quality sound.  Don’t even think about trying to use the built-in microphone on your camcorder–it sounds terrible and is a dead give away that the video is made by an amateur.

You can purchase a simple wired lavalier microphone for as little as $18 on Amazon.com–I recommend the Audio-Technica ATR 3350.  If you have a larger buget, the wireless ATR288W runs about $120 and also comes with a hand mic.

Lapel mics are great for one-person videos, and if that’s all you’re doing then this might be the only mic you need.

Handheld microphones are great for doing videos where you interview someone on-camera (think local TV news reporter).  If you get the ATR288W, it comes with a hand mic that plugs into a wireless transmitter.  You can also get hand mics that have a built-in wireless transmitter.

The three previously mentioned microphones are for use with a camcorder, but what if you’re recording screen capture videos or using a webcam?  In that case, you might want a USB microphone like the Blue Yeti.  You can plug that into your computer and use in place of your computer’s built-in mic, which is not very good.

Now, not everyone will need all four microphones.  Depending on the types of videos you’re making, you may only need one or two.  As you get more experience, however, you’ll probably find that you’ll need multiple sources of audio to get  the sound quality you want.  At that point, you may want to get an audio mixer or splitter like the AZDEN Cam-3 mini audio mixer.  This will allow you to capture audio from up to three sources at once to the same camera–so, for example you could have a shotgun microphone recording ambient sounds from the room, and a lavalier microphone recording one person’s voice (such as the presenter) at the same time.

If you need help figuring out how to use all these microphones, head over to my Video Marketing Course for more detailed instructions.